The City of Renton was incorporated in 1901 and is located on the southern shore of Lake Washington, next to the cities of Tukwila and Kent. The City serves about 54,900 residents in King County. It operates under the mayor-council form of government. The City has an independently elected Mayor and seven elected Council Members. The City provides a full range of municipal services including police, court and fire. It operates enterprise funds for water and sewer services and a surface water utility. The City provides library, parks and recreation, and planning and community development services. It also operates its own airport and golf course. It contracts for jail services with King County and Yakima County.
The above information is from the State Auditors (Audit Report Search) webpage

2003 City of Renton List of Employees, Job Title and Salary

Here's the freedom of information request letter I sent to the City of Renton, in March 2003

Here's a letter the city of Renton sent me in March 2003, saying that they needed more time to process my request.

Here's the freedom of information 2nd request letter I sent to the city of Renton on November 17, 2003.

Here's the letter that Renton sent me in Nov 2003, along with copies of the Renton employees names, job titles, and salaries. Renton explains that they sent me this information in March 2003. I believe them. 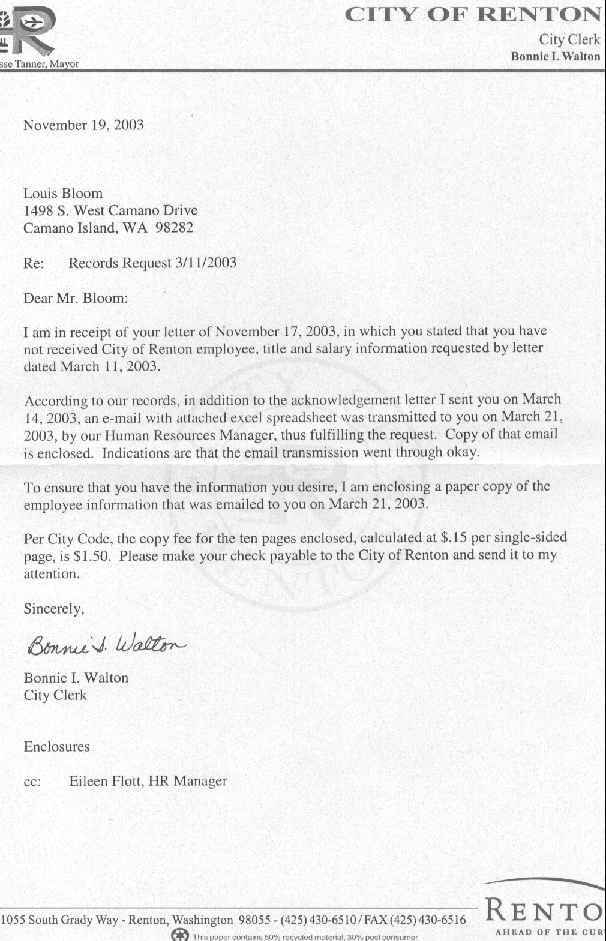 By clicking on the rainbow colored square icon, you can see information about the people who look at these webpages. These statistics report meters are free to anybody.

Clicking on the above picture will take you to a page about the webmaster.
A freedom of information letter template is at http://www.splc.org/foiletter.asp
Washington State newspapers have detailed information about access to public records at http://www.openwashington.com/
Here's information on Washington State websites about counties, ports, school districts, cities, ect...
In Nov 2002, the Wa St Court of Appeals, ruled that government employees names cannot be kept secret.
e-mail--- welcome